Portable, decor-friendly, free-standing, light-weight, high peformance broadband abosorption and tuneable diffusion in a single product, Cylinder Traps offer many advantages over traditional panel-style broadband absorbers. Far from a DIY Tube Trap that was thrown together, Cylinder Traps continue to be tested and measured against competing products to ensure their performance exceeds these products on multiple levels. Aural Endeavors utilizes top grade measuring equipment to test Cylinder Traps in our own recording studio, which houses over sixty Cylinder Traps of various sizes, as well as competing products from other manufacturers. 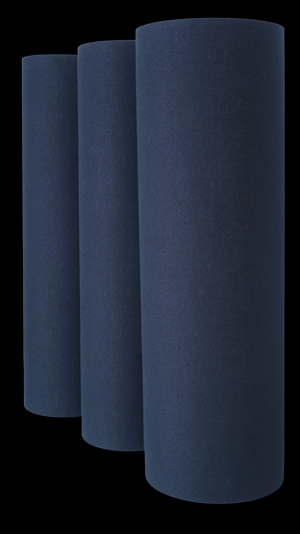 Because Cylinder Traps are free-standing, light-weight, and stackable, any room can be treated much more easily and effectively compared to traditional traps, which often require wall and/or ceiling mounting. When mounting becomes a necessity, Cylinder Traps require less effort and hardware when mounting to walls and ceilings compared to typical broadband absorbers, due to their relatively light weight and shape! In addition, there is no need to worry about your traps sagging over time due to questionable "me too" designs; Cylinder Traps employ sturdy internal framing that has been time-tested in real working recording studios.

In addition to their exemplary performance and broad feature set, we are often told Cylinder Traps are visually appealing and blend well in a variety of living spaces. Because of their cylindrical shape, smooth surface, lack of corners and "hard edges," they tend to blend into rooms relatively easily, becoming arguably less imposing than a room full of rectangular traps.

Here are a number of environments/rooms where Cylinder TrapsTM can show a marked improvement in audio:

Here are a number of benefits heard when utilizing Cylinder TrapsTM as an acoustic tool:

Here are some common uses utilizing Cylinder TrapsTM: Note that the above uses can be achieved very quickly on the fly due to the portable nature of Cylinder Traps. 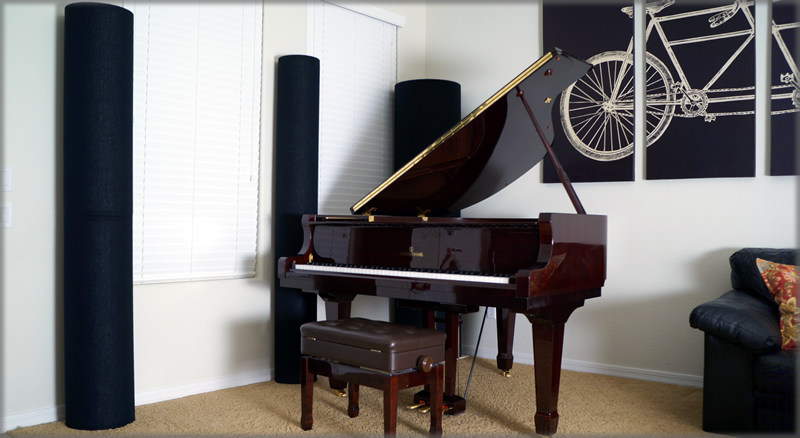 They are free-standing and typically lighter in weight per volume. This makes it much easier to experiment by moving them around with little effort to quickly change their acoustic effect on the environment.

Because Cylinder Traps have a larger amount of self-contained air space compared to panel traps, they retain more of their overall absorption capability when moved away from the room's boundaries. This may make Cylinder Traps a more viable acoustic tool when pulled away from walls if the application calls for it. One example would be a ring of traps to obtain a tight-sounding "roomless" recording space.

The variability of diffusion covers a very wide range, going from no direct diffusion at all to full 180 degree poly diffusion back to the audio source. The amount of perceivable diffusion within a room treated with Cylinder Traps can be changed dramatically within just a few minutes or even seconds depending on their location.

In addition, comb filtering can be minimized by alternating Cylinder Traps of different sizes and/or moving them further away from the audio source, microphones, or listening positions. Any mystery in the role diffusion may provide in a particular recording application, for example, can quickly become realized and useful by quick experimentation. Cylinder Traps make this type of experimentation quick and easy.

Since Cylinder Traps are stackable, the chances of having to mount them on walls becomes less frequent, giving them additional flexibility. Freedom from mounting allows quick and easy tuning and repositioning to change their acoustic effect on the fly.

Lack of abrupt vertical angles and corners helps give Cylinder Traps less of an imposing presence, especially when placed in corners. The cylindrical shape itself appears to visibly take less volume than it actually does. 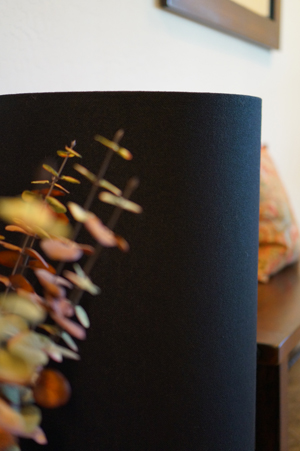 Even though a twenty-inch wide by three-foot high (20" X 36") Cylinder Trap placed in a corner protrudes more into the room than a two-foot wide by four-foot high (24" X 48") panel trap, the sheer width and height of the panel trap will always appear to take more room, even though its total volume plus the air space behind it is effectively less than the Cylinder Trap. This is because the human eye is more sensitive to 2-D dimensions (width and height) compared to depth perception (the thickness or depth of an object). This allows the user to actually place more effective absorption into the room, while visibly appearing to use less.

Furthermore, because of the shape and diffusive capabilities of our Cylinder Traps, less of them are needed along a wall and on ceilings when taming anomolies like slap-back echo. This is due to the depth and high diffusive field around the trap, allowing more natural room boundaries to be exposed.

ADVANTAGES OVER OTHER TUBE SHAPED TRAPS

Due to our Cylinder Trap's minimalistic design, we can offer our product at a significantly lower cost than competing products with the same feature set and comparable performance.

We're often told our Cylinder Traps are visual works of art. Hand-crafted and hand-sewn, they are sure to become the center-of-attention conversation pieces in your studio or home theater room.

ADVANTAGES OVER ANY OTHER BROADBAND ABSORBER 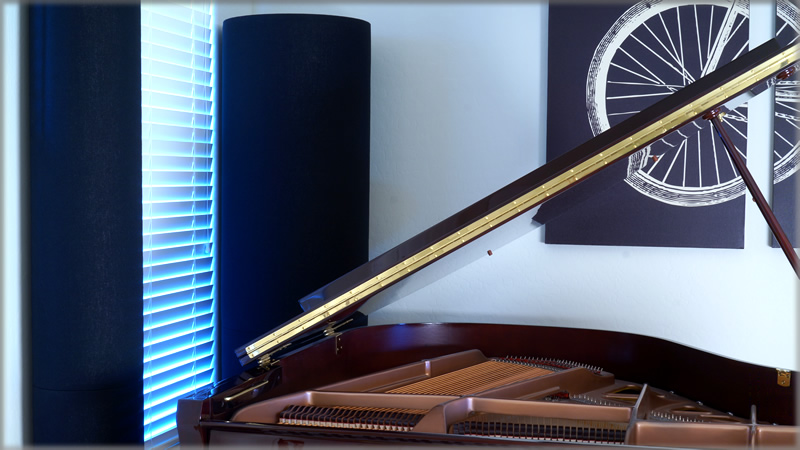 Based on our extensive in-house testing, we have found there is no performance penalty in our Cylinder Traps compared to competing products of the same cubic volume we have tested against. In fact, we have found that Cylinder Traps excel in a few key areas. The products we compared include broadband absorbers that include the immediate air space behind them as part of their total cubic volume; i.e. the air space behind a corner-straddled panel trap, for example. By performance, we mean low frequency absorption where it counts, as well as the remaining audible frequency range.

As an example, our 20" wide by 36" high Cylinder Trap in a corner has out-performed every 24" wide by 48" high corner-straddled panel-type trap we've tested in overall frequency absorption. This should not come as a surprise, however, considering the total volume of the Cylinder Trap is greater than the panel trap plus the air space behind it. Curiously, the Cylinder Trap appears to consume less volume, which is actually not the case.